Mining the Moon: The Next Gold Rush 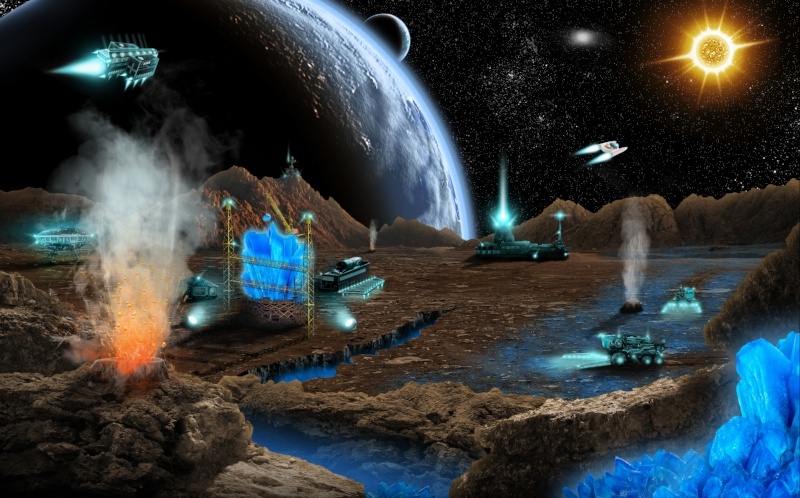 January 2018 saw three unique Moon phenomena occurring all in one day - a Blue Moon (second full moon within a single calendar month), a Super Moon, which is when the Moon comes closest to the Earth while traveling in its elliptical orbit, and a total lunar eclipse. All three happened on the last day of the month.

While this triple-header Moon event created a great deal of attention worldwide, it's nothing compared to the news that will soon hit relating to future mining of the Moon. There's currently an extra-terrestrial gold rush afoot that will likely make the California gold rush of the 1800's look like a mere practice run of precious metals mining. There are a handful of billionaires out there right now actively backing the efforts of various companies planning to begin precious metals mining in outer space. In addition to extremely valuable minerals, there are untold treasures to be found, not only in the Moon's pay dirt but also on near-Earth asteroids that float freely in space.


Why All the Interest in Cosmic Mining?

There are purportedly quadrillions of dollars worth of precious metals and other valuable resources on the Moon, just ripe for the picking. It's also believed that these valuable treasures may be only a few feet under the surface, making extraction an easy process once the needed equipment is in place.

While gold, silver, cobalt, and titanium, expected to exist in large supply on the Moon, are certainly valuable to would-be space-age prospectors, the isotope Lunar Helium-3, in short supply here on Earth, is thought to be quite plentiful on the Moon. Lunar Helium-3 is valued many times more than any of the precious metals thought to be there. Compare the value of gold, currently trading at about US$1,350 per ounce on the world market, with the value of Helium-3, projected to have a value of about US$40,000 per ounce.

This unbelievably high valuation stems from the fact that Helium-3 is extremely scarce on planet Earth and its potential as an alternative fuel for atomic reactors is incredible. It's estimated that a mere 220 pounds of Helium-3 would be sufficient to power a city the size of San Diego for a full year without creating any toxic waste byproducts.

Besides the prospect of uncovering treasures suspected to be on the Moon, cold hard cash is also available to privately funded companies that succeed in being the first (or second) to satisfy the requirements for the Google Lunar XPRIZE Competition. Announced in 2007, the XPRIZE offers a total payout of $30 million. This contest was brought about as a means of fostering innovation among private entrepreneurs to perform efficient, low-cost Moon access. Prizes for this competition include the following:

A handful of other prizes are also up for grabs, including a Water Detection Bonus, Survival Bonus, Range Bonus, Heritage Bonus and Apollo Heritage Bonus.

Not all the valuable assets awaiting discovery on the Moon are exotic minerals and isotopes. Water, thought to be one of the most valuable commodities in outer space, is believed to be plentiful on the Moon. The hydrogen and oxygen that make up a water molecule can be separated and then turned into rocket fuel, and the frozen water expected to be on the Moon could conceivably be used to create an outer space “gas station.” A portion of the Google XPrize, one million dollars, is earmarked for the first team to satisfy the requirements of the Water Detection Bonus Prize. The winner must provide scientific proof that water exists on the Moon.

In addition, the very dirt found on the Moon's surface, called regolith, should prove to be extremely valuable. Rather than transporting the materials needed for lunar building projects, regolith can be used on-site to create building bricks. Several projects have been successful in this venture, including the University of Virginia's use of simulated regolith to produce bricks capable of being utilized for Moon-based building projects. The European Space Agency has also been successful in mixing magnesium oxide with synthetic regolith to create a material with the potential of producing bricks through the 3-D printing process. Imagine being able to print all the bricks you need right on site.

Cosmic mining isn't just some optimistic pipe dream. Some of the world's richest venture capitalists have already made preparations to launch Moon mining operations. The rockets are already built and several companies have received the go-ahead by the FAA to conduct lunar launches.

One of the front-runners of these visionary companies is Moon Express, located in Mountain View, CA, co-founded by billionaire Naveen Jain. Their aim is to be the first company to send a commercial spacecraft to the moon. Moon Express has already become the first company to successfully test a prototype of their robotic lunar lander, working out of Launch Complexes 17 and 18 at Cape Canaveral, just adjacent to the Kennedy Space Center in Florida. Completing the presentation and successfully testing the first privately funded lunar landing vehicle has already earned them one million dollars from the Google Lunar XPrize competition.

Moon Express is well-positioned to earn an additional 20 million dollars of Lunar XPrize money for the first privately funded company to actually place their lunar lander on the Moon. In July 2016, Moon Express became the first company to secure approval from the U.S. government to launch a robotic aircraft into space, beyond the traditional limits of Earth's orbit, and then on to the Moon.


Meet the Other Potential Moon Miners

While Moon Express is making marked progress toward their goal of being the first privately funded organization to reach the Moon, they are by no means alone in this quest. Elon Musk, CEO of SpaceX, and Richard Branson, founder of Virgin Galactic, have both been in the news recently regarding their attempts at successful space flights. Although these two companies haven't been concentrating their efforts strictly on the potential of Moon mining, their advancements in the technology required for space flight have helped others who are zeroing in on the Moon as their end goal.

Jeff Bezos, CEO of Amazon.com and founder of Blue Origin, is driving down the expense of space travel through perfecting the concept of reusable rockets. Their rocket, dubbed New Shepard, has been launched and landed successfully five different times. While Blue Origin is currently concerned primarily with taking tourists into Earth's orbit, a newly announced program is also being developed for sending cargo payloads to the lunar surface. SpaceX has also successfully launched and landed rockets for reuse. Having reusable rockets saves these companies huge amounts of money.

The Promise of Asteroids

Not all space prospectors are limiting their view to the Moon. There's also great promise in the many asteroids that fill outer space, and several companies are gearing up to become “harvesters” of NEAs (Near Earth Asteroids).

Most notable is another Mountain View, CA company called Deep Space Industries (DSI). They're currently developing technologies needed for mining asteroids, with the goal of making materials in space that have been extracted from asteroids. Their sights are set on becoming the first asteroid harvester and they've formed agreements with the Luxembourg government to partner in potentially lucrative asteroid mining activities. Planetary Resources, located in Redmond, OR, also has partnership agreements with the Luxembourg government to pursue an asteroid mining program. Luxembourg is the first European country to announce their intentions to create the regulatory and legal framework necessary to conduct in-space mining activities.

The United States took this step a year earlier in signing the U.S. Commercial Space Launch Competitiveness Act, which establishes legal permission for U.S. companies to maintain property rights for resources obtained through activities in outer space. Planets, including asteroids, located in outer space are to be treated similarly to the way resources found in international waters are treated on Earth. While nobody can own the underlying objects, they are free to utilize the privately obtained resources.

The next few years will see privately funded companies flying missions with their spacecraft to demonstrate the validity of galactic mineral extraction. It will start with missions occurring within Earth's orbit, move on to landings on NEAs and finally onto the lunar surface itself.

Once these milestones have been reached, it's predicted that a flood of lunar prospecting companies will follow. The 4-minute mile, thought by many to be unreachable until the barrier was finally broken in 1954 by Roger Bannister, has seen many runners surpass that time limit since, even including some high school runners. In the past 60 years, nearly seventeen seconds has been shaved off the 4-minute mark, with the current record standing at a time of 3:43.13.

Whoever reaches the Moon first in a commercial enterprise wins first dibs on the treasured resources that may be located just a few feet below the surface. Once it's been proved possible, many others will be soon to follow.